Orvieto and wines from the Umbria region of Italy

Orvieto is a town in the region of Umbria, which is centrally located in Italy. It's almost halfway between Rome and Florence. The most popular wine of the Umbrian region is Orvieto, which is named after the beautiful hillside medieval town. Like Tuscany with its Chianti and Chianti Classico, Orvieto also has Orvieto and Orvieto Classico, which comes from a smaller territory within this region.

Orvieto is known for being a dry, lighter style, crisp white wine. The grapes that make up Orvieto are mostly trebbiano with also some verdello, grechetto, canaiolo bianco and a little malvasia. One of the more popular producers of Orvieto is a name you may be familiar with, Antinori, whom comes from the Tuscany region, but also produces Orvieto wines.
There are red wines produced in Umbria as well, but they are lesser known to us. One is Torgiano Rosso Riserva, which comes from the town of Torgiano. It is produced with mostly sangiovese and canaiolo and trebbiano. One of the key players of this area is the producer Lungarotti. The other red is Sagrantino di Montefalco produced from the Sagrantino grape in the town of Montefalco. The best known producer here is Adanti. Sagrantinos are more powerful and robust where the Torgiano are more medium body. Both of these wines have earned the DOCG status and they are both are more central in the Umbrian region where Orvieto lies more in the southwest.

Orvieto consists of 13 DOC regions, but the history here doesn't date far back as in some other regions. Some of these regions were created only within the last 30 years. This wine was an originally a sweet wine enjoyed by popes and there are still some well raved about sweeter style dessert wines from both Montefalco and Torgiano.

Out of the 20 regions in Italy, Umbria is the fourth smallest so wine has never been a main focus of this region due to olive oil production and grains. It has the capability to be much more as it has similar topography to Tuscany. If you haven't yet tried Orvieto wines or any wines from the Umbria region, expand your horizons and grab a bottle for your next meal. It will be a lot easier for you to find the white Orvietos than some of the others. If you sample some let me know what you tried. I love to hear experiences.

Just an added tidbit, but these were old Etruscan caves found underground in Orvieto that were ideal places for storing wine.

I spent the last part of my honeymoon in the northwestern corner of Italy in the Italian Alps
bordering France and Switzerland. We stayed in the Aosta Valley in the town itself of Aosta. The Aosta Valley is the smallest wine region in Italy and has the highest vineyards in Europe. They are all on the steep slopes of the mountain side so therefore they are harvested by hand. You may know this area for the famous mountain, Monte Bianco or Mont Blanc, the tallest mountain in western Europe. I was pleasantly surprised by entering this region just how many vineyards there were. 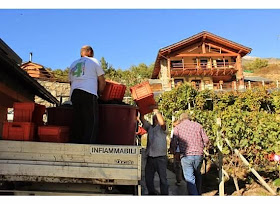 Luckily, the beautiful agriturismo where we were staying, La Viggni de Crest, were harvesting their own grapes upon arrival. There is something special about watching friends & family getting together to harvest their grapes from their hard labor throughout the season. If you're not familiar with what an agriturismo is, it's similar to a B&B, but they are working farmers so they produce a lot of their own crops and live a lot off their own land. They are some of the most beautiful places that I have stayed at in Italy including this one.

La Viggni de Crest has both apple orchards and vineyards with about 1 hectacre of orchards producing 300 liters of apple juice and 2 hectacres of vineyards producing about 18,000 bottles. The grapes they produce for reds are some that are specific to this area including Fumin for reds, but also Petit Rouge and Gamay, known for being one of the grapes in the Beaujolais wines in France. For whites they produce Chardonnay, Pinot Gris, Traminer (from the Bolzano area of Italy), and Muller Thurgau (a German grape). 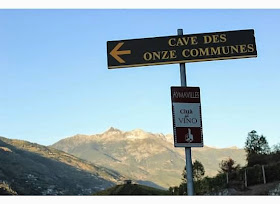 Our hosts, David and Emanuela Crest, were very hospitable. They sell their grapes, as well as many others do in the area, to a facility, Cave des Onze Communes. The Cave des Onze Communes is a cooperative winery that takes the grapes from 11 different municipalities and produces the wine. They produce about 400,000 bottles with 19 different DOC wines under the DOC Valle d'Aosta label. I was very impressed by all the whites and reds (and a yummy dessert wine from muscat) including those that indigenous to this area like Mayolet, Petite Arvine and Torrette. Unfortunately they don't sell their specific wines outside this area so I enjoyed them as much as I could while visiting and even took some home to enjoy.

I have been to many, many regions of Italy, but this part is a hidden gem that is not well tourist traveled, except for the winter ski season. The wines are great and the surroundings are some of the most peaceful and beautiful I have ever seen. 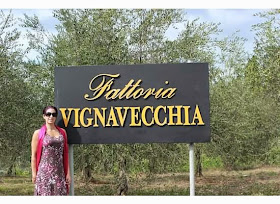 My first stop for my day out in Tuscany's wonderful world of vineyards was the winery, Vignavecchia. They are located in Radda, which is one of the main provinces in Tuscany for Chianti Classico production. It has been in the Beccari family since the 1870's. They had inherited the estate from the original owners, the Minucci family, that had started the winery in the 18th century.

There are about 7.5 acres of olives groves planted and 47 acres of vineyards with 70% sangiovese, 10% canaiolo, 7% colorino, 5% each of merlot and cabernet and 3% chardonnay. They produce about 10,700 cases with Chianti Classico dominating the output. About 34.5 of those acres are dedicated to Chianti Classico which is under the DOCG status.

It takes about 2 weeks and ten people to complete their harvest and when we were there they were going to be done in about 5 days, so by now they have finished. 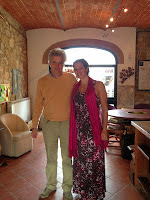 The director, Stefano Miniati, was fantastic. He did the tasting for us and couldn't have been any nicer. Of all the wines that I tasted they were all great in their own way, but I enjoyed their 2009 Vigneto Odoardo Beccari, which is their Chianti Classico DOCG Riserva. It's a blend of 90% sangiovese and 10% canaiolo. It comes from a smaller parcel of land and only 1,000 cases are produced annually. It goes through about 18 months maturation time with about 6 months in the bottle. It was a classic Chianti Classico and was a lot drier than the others, but had a long beautiful finish. Stefano's opinion was that the last great vintages were 2007 and 2008 and everything else since then had been average.

If you have an opportunity to taste any of the wines from this vineyard make sure you do so and if you're ever in Radda make sure you stop by.  Stefano is a pleasure to deal with.  You can't go wrong with any wines from here including their vin santo as well.   Visit their site at Fattoria Vignavecchia.

Don't go to Tuscany without this beautiful and detailed map.