The Canaiolo grape and its relation to Chianti

If you love chianti you should get acquainted with canaiolo. Giovanni Sordi, winemaker at Fattoria Le Bocce in Greve in Chianti, shared with me the following information on this grape. Canaiolo is a grape that has a long standing history in Tuscany. Until the end of the 1700's it was the most cultivated red grape in Chianti. It's native to Tuscany where it's known as canaiolo nero that is added to wine such as chianti to help soften it. There is also canaiolo bianco, also native to the area, that is known as drupeggio in Umbria. 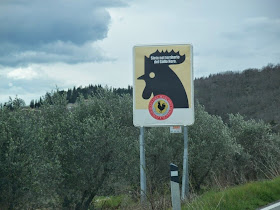 Much of history mentions that canaiolo was introduced by the Etruscans and the actual name derives from latin, dies caniculares, that indicates the days of the heat wave or the hottest days of the year when this grape changes color to reddish purple. Canaiolo comes from a 5 leafed plant with stocky grape clusters that at times have some small red strains that indicate the presence of anthocyanins.
It's not often you find wines that are 100% canaiolo, but when it is purely vinified with canaiolo it has unique characteristics that resemble a beautiful roundness on the palate, often countered on the finish becoming lightly bitter. The color in the wines with youth are red and slightly mauve that transform to ruby red. The aroma that distinguishes canaiolo is given from the mature fruit reminiscent of black cherry. Giovanni considers this the most elegant of Tuscan wines.
Caniolo is a difficult grape to cultivate because its sensitive to mites and powdery mildew and it's necessary to be cultivated in warm zones and vineyards well exposed to the sun. Due to this difficulty, it has caused the reduction of cultivation of this grape. It's a wine that is difficult to make, but comes from great tradition and emotion. It's a true challenge for the future of Tuscany.
Giovanni wanted to mention a winery that he knows very well that since 1990 had the idea  to take this grape and make it a wine more representative of its true characteristics. Castello di Modanella, which is found near the village of Rapolano Terme in the province of Siena, produces Poggio L'aiole Canaiolo IGT that is made up of 100% canaiolo and demonstrates the lovely characteristics of this wine well.