Tasting Through the 9 Communes of Chianti Classico

A couple weeks ago I attended a Masters class in Boston hosted by the Consorzio Vino Chianti Classico and led by Jeff Porter.  It was a horizontal tasting discussing the diversity of Chianti Classico and its 9 communes including:
Tuscany is one of the regions I have traveled through the most and understand the lay of the land the best.  Plus, sangiovese is one of my most favorite if not my most favorite grape of Italy.  I was thrilled to attend this class to get a better understanding of the different communes comparing their styles of Chianti Classico.
We tasted through 10 wines so I honestly can’t say coming out of the event that I can completely tell the difference between the communes since we didn’t taste through every commune.  Without also trying multiple wines from each commune it would be hard to characterize them right here and now.  Many of the owners were in attendance each representing their winery giving a lay of the land to best describe what makes them unique.  What was completely evident from the tasting was even when we compared wineries from the same commune some were very different in comparison.  With some it was the variety of grapes used, the altitudes of the vineyards or the soils in which the grapes are grown.  This to me is one of the most fascinating aspects of wine. 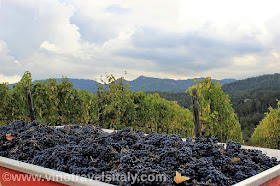 The wineries present included:
Although I’m sure many folks know, the wine region of Chianti Classico is located in Tuscany, which is in central Italy.  It is almost the same size as Burgundy, France and is home to about 600 producers with 7,200 hectares total (almost 18k acres).  Interesting fact is that about 40% are certified organic or eco-certified.
The history of Chianti Classico
The soils of Chianti Classico
For those that love the chemistry of the land and geology this part is for you.  Understanding soils is very important and something I myself need to dig into more.  It will help you understand what lends certain characteristics to the wines.  The soils of Chianti Classico I learned mostly consist of galestro, albarese and macigno.  Galestro is a highly powdery clay schist that is hard and compact.  It forces the vines to struggle resulting in wines with power and intensity.  The albarese soil is a hardened marl stone and limestone that results in wines with high acidity and finesse.  Lastly the macigno, a sandstone, dusty rock lends aromatics and florality. 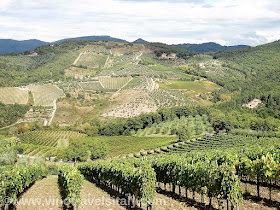 Annata is the standard wine that requires a minimum of 12% alcohol and 12 months of aging.  These wines are fruity, approachable, fresh and pleasant.  Jeff mentioned that he has had 20 to 40 year old annata that were “stunning” proving the impressiveness of these wines even at the basic level.

The Chianti Classico Riserva wines require a minimum of 12.5% alcohol with at least 2 years of aging with 3 months in the bottle.  These wines are fruity, consistent and persistent, well-integrated with the oak to go along with its structure.

The new Chianti Classico Gran Selezione is based on single vineyard sites or the best selection of grapes from a particular winery.  The alcohol minimum is 13% with 30 months aging with 3 months in the bottle.  Wines of fruit, spice, depth, elegance and a balance of acidity and tannins.

The wines of Chianti Classico’s 9 communes
There were many styles of Chianti Classico portrayed across these wines and since I love sangiovese I can appreciate them all.  Jeff Porter described it best by saying “there is a chianti classico for everyone”.  Here are my favorites in ranking order.