A Look into the Wines of Moldova #WinePW

This month’s focus for our Wine Pairing Weekend event takes us to Moldova.  Sadly I had to look up where Moldova was located.  I knew it was somewhere in Eastern Europe and discovered it is located between Romania and the Ukraine, right off of the Black Sea.  Wine really is made everywhere isn’t it.  What was even more shocking is that this was even my first time trying wine from Moldova.  The first record of winemaking there was 3,000 B.C., but since 7000 B.C. wine was used as a reward after fights or exchanged with other items.

The majority of the wine produced in Moldova is still with about 14% produced as sparkling.  White wines rule the majority at about 70% mostly concentrated in the wine region of Codru.  The rest are red wines that can be found in both central and southern Moldova.  The vitis vinifera vines rule the production with only about 10% being native grapes.

Moldova has 3 main wine regions including:

I learned lots of fun facts in my research including that Moldova holds the Guiness record in 2005 for hosting the biggest wine collection, known as the “Golden Collection”.  It is located underground in the Milestii Mici containing 1.5 million bottles with the oldest only being since 1969.  Moldova also has the greatest density of vineyards in the world occupying 3.8% of the territory per Wines of Moldova.

I received samples from 3 wineries including some local grapes as well as international grapes.

Chateau Vartely – Vartely translates to a place of fortress.  The winery is rather newer to the seen established in 2004 located within both the Codru wine region and Valul lui Traian in the Bugeac in southern Maldova.  Their grapes are grown on about 740 acres.  The winery opened themselves up to guests in 2008 at a few villas they have on site.

I tasted the 2017 Chateau Vartely Feteasca Regala Codru IGP.  Made 100% from the local Feteasca Regala grape.  Straw yellow in color.  Beautiful aromatics of peach and apricots.  A refreshing wine with nice acidity and slight minerality.  With an SRP of $16 this wine is a great value.  13% ABV

Pairing: I paired this wine with a chicken and broccoli sauté over jasmine rice.  A delightful pairing and complement to one another. 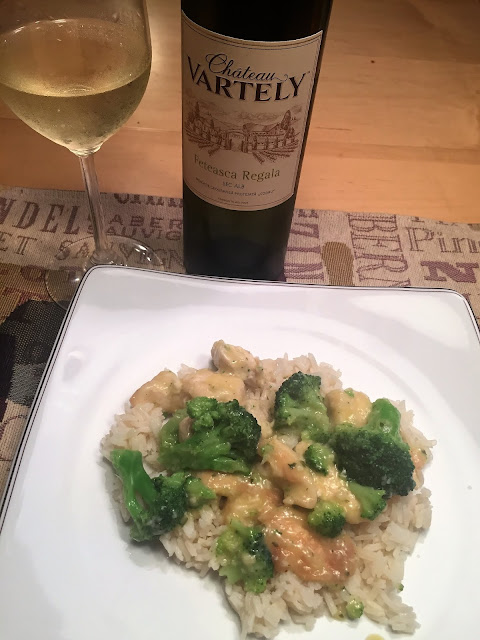 Radicini Winery – This winery is one of the brands under an overarching holding company located in the Codru wine region.  I tasted the 2018 Radicini blend of Saperavi, Merlot and Feteasca Neagra.  Dark ruby with purple highlights.  Medium in body with dense fruit with blackberries and black cherry.  Hints of white pepper with spice.  SRP $20

Gitana Winery – Located within the Valul lui Traian wine region in the two villages of Filipeni and Romanovca of the Leova district.  The Dulgher family purchased the winery in 1999, but the original winery under the name of the Tiganca Winery was established in 1953.  The Gitana brand was created in 2009.  In 2002 the family planted their own vineyards 70km from the Tiganca Winery on hills about 150-200 meters above sea level near the forest.  The family owns almost 900 acres.  I sampled the 2016 Gitana Lupi Rezerva Red, a blend of Cabernet Sauvignon, Merlot and Saperavi.  This wine was the first blend created in 2012.  Aged for 2 years in big Slavonian oak barrels and an additional 4-6 months in barrique.  Dark ruby in color with aromas of ripe raspberries both on the nose and palette.  I got a little bit of warmth from the higher alcohol.  Supple, silky tannins with sweet vanilla from the oak on the finish.  SRP $35 ABV 14.5%

Pairing: I paired both of these reds with grilled steak tips, roasted potatoes, butternut squash with a side salad.  My personal preference was the Gitana Lupi.  I felt the flavors were more layered and concentrated, which I appreciated with the flavors of the steak. 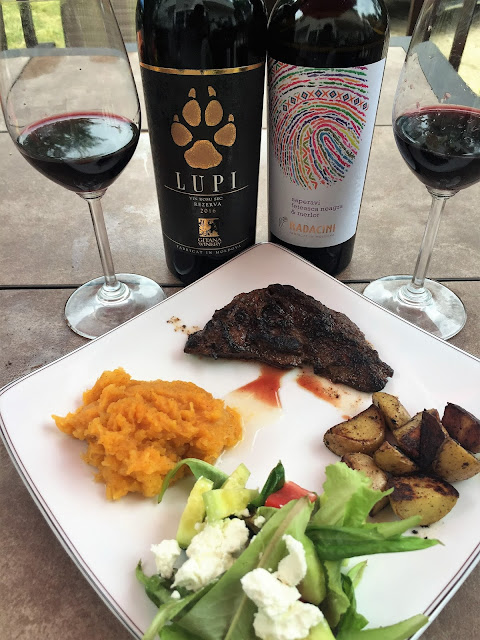 Don't stop learning about wines from Moldova.  Chat with the rest of my food and wine loving friends live on Twitter at 11am EST Saturday with #WinePW.  Read their fantastic blogs below.  Enjoy!

*These wines were provided as samples, but opinions are all my own.