Piedmont is one of my favorite wine regions in Italy.  Today I’m sharing a wine from the historic Marchesi di Barolo wine estate whom celebrated their 90th anniversary back in 2019.  Although I’d love to be sharing some of their reputable Barolo and Barbaresco wines, I’ll be sharing one of their Barbera wines from Monferrato.

Marchesi di Barolo was originally owned by Marchese Carlo Tancredi Falleti di Barolo and his wife Giulia.  They had been producing Barolo since the early 19th century and had donated many of their proceeds to a local charity that helped the needy in the city of Torino.  When the couple passed away there was no one to inherit the estate.  In 1929 a local winemaker, Pietro Abbono, purchased the winery and eventually all the vineyards.  Since 2006 Marchesi di Barolo is now managed by Piero’s great grandson, Ernesto Abbono, whom is the 5th generation winemaker, along with his wife Anna and their children.  Today the winery still donates to the same charity that Carlo and Giulia originally intended to support.

Marchesi di Barolo occupies 430 acres in the Langhe appellation of Piedmont.  The wine cellars and winery located in the actual town of Barolo that overlook the Marchese Falletti castle.  The vineyards are located in Barolo of the Langhe, along with the Roero and Monferrato appellations, but the wines are vinified back at the original wine cellars.

The 2014 Marchesi di Barolo Barbera del Monforte “Maraia” DOC is grown on calcarous clay soils that are rich in quartz sand.  I love the meaning of the name of this wine as it reminds me of my two little boys.  The name “Maraia”, meaning rowdy kids or little rascals in local Piedmont dialect, is meant to highlight the wine’s lively nature.  The grapes are grown in Maranzana in the Asti province.  They are hand-picked spending 8 days macerating with 1 year in Slavonian oak. 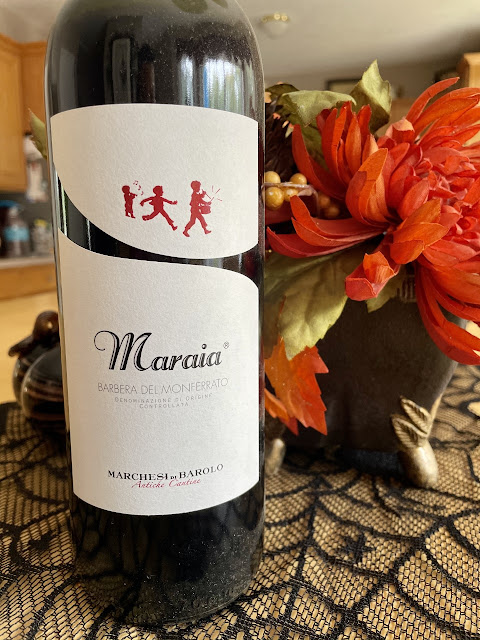 The color of this wine was translucent garnet.  I’m not one for crazy descriptors, but the wine was perfumed with notes of grape jam, cherry chapstick and ripe blackberries.  Medium-bodied and lively acidity on the palate with tart cherry notes and silky tannins.  I sensed a little warmth on this one, but the alcohol was only 13%.  SRP $12.99 at my local wine shop.