It’s been a busy month between a vacation to the Outer Banks of North Carolina, a milestone birthday for myself and anniversary celebrations, but I’m glad to be sharing a wine given to me by my Italian friend living in Tuscany when he attended my wedding in Bucine 8 years ago.  I’ve been nervous opening some bottles I’ve been holding onto as you never know how they have held up, especially since some of these bottles have traveled with me overseas and have been involved in a home relocation a few years back.  Today’s bottle that I’m sharing is a 2009 La Camporena Chianti Classico Riserva from Greve in Chianti and am happy to say it has withheld the test of time.

I couldn’t locate too much information on this winery, but have reached out to them so I’m hoping I can circle back with an update at some point.  The current owner was inspired by his father whom relocated to Greve after the war and invested a lot of hard work into La Camporena.  The trigger for him to start producing wine of his own came from stumbling across a bottle of his birth year, 1967, that said Camporena and he knew this was a sign to start producing his own wine, which began in 2006.  The winery sits on 17 acres and is just a mile or two outside the center of Greve in Chianti.

I think many of us daydream of Tuscany whether we’ve been there or not already.  If you’re never been to Greve it’s a must stop on your way out of Florence heading south as you enter into the Chianti Classico region that stretches 40 miles north to south ending in Siena.  The central focus of Greve is Piazza Matteotti, which is encircled by loggias, shops, restaurants and museums.  A great little town for a short visit paired with great wine.  I still even have some great Chianti Classico memorabilia I purchased from a small shop in town.

I couldn’t locate the makeup of grapes for this 2009 La Camporena Chianti Classico Riserva, but standard Chianti Classico Riserva wines have regulations they must follow in order to be labeled as such.  The wines must be made of at least 80% Sangiovese, although many producers use higher quantities if not 100% Sangiovese.  Up to 20% of other allowed red grapes including Canaiolo, Colorino and some international grapes like Merlot and Cabernet Sauvignon can be used.  The wines must be aged at least 24 months with at least 3 of those months spent in the bottle.  The alcohol must also be a minimum of 12.5%.

The 2009 La Camporena Chianti Classico Riserva was surprisingly still in tact.  Ruby in color leaning towards brick red hues.   Cherry was clearly showing on the nose and on the palette as well.  A lighter medium bodied wine with dried herbal notes.  A lingering acidity with elegant tannins finishing with sweet tobacco notes.   It almost went down too smooth.  I do not have the SRP to share since it was a gift.  ABV 14% 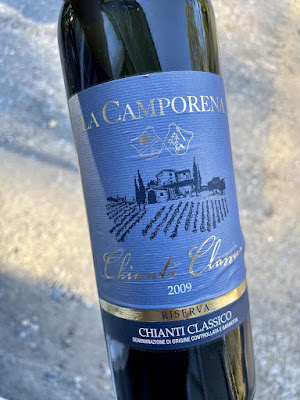