A Toast to Brunello with Val di Suga #ItalianFWT

As we come into the last few months of the year our Italian Food, Wine & Travel group (#ItalianFWT) is featuring the three B’s of Italian wine: Brunello, Barbaresco and Barolo.  Although we know there are others these are some of the most prominent wines of Italy.  I thrilled to have Brunello be the feature for October as not only is my birthday and anniversary month, but if I had to pick a favorite wine Brunello may take the cake.

Brunello hails from the Tuscan town of Montalcino located in the Val d’Orcia, about 20 miles south of Siena.  This area was granted as a UNESCO world heritage site in 2004.  As most of Tuscany is known for it’s splendid landscapes, this area is rich in rolling hills, olive groves and forests.  It’s a rather close proximity to the Tyrrhenian Sea and about 70 miles also from the Apennines mountains.

The climate here is mostly Mediterranean and can be rather mild during the grape growing season.  The Montalcino area is also one of the warmest and driest climates.  The northern part of Montalcino the grapes will ripen slower where in the southern part they receive more sun and winds resulting in different styles of wine.

In historical finds, wine has been made by the Etruscans in this area over 2,000 years ago.  The wines were originally appreciated by the elite, but started to receive recognition by one of the pioneers of this area Biondi Santi after World War II.  He was a soldier in the Garibaldi army whom left to take over his grandfather’s estate.  Biondi Santi was the only commercial producer at that time.  His practices in Brunello winemaking were different than any others starting to develop at the time.  He vinified the grapes separately where at the times this was not the norm.  He forego the secondary fermentation and the fruit profile in his wines were pure even though they were aged in wood.  In the 60’s there were around 10 producers with today the area of Montalcino features over 200 producers of Brunello.

Brunello wines must be made from 100% Sangiovese, but a clone known as Sangiovese Grosso.  They’re larger Sangiovese berries and are known as the “little dark ones”.  They have thick skins resulting in high acidity and higher tannin wines with bold fruit flavors.

Brunello di Montalcino is a wine that was granted DOC status in 1966 and later elevated to DOCG in 1980.  It was the first in Italy actually to receive this higher designation of DOCG.  In order to be labeled a Brunello di Montalcino DOCG the wines must undergo 4 years of aging with an added year to be a riserva.  A minimum of 2 years must be aged in oak and at least 4 months in the bottle, with the riservas requiring at least 6 months in the bottle.  The grapes are also grown on hillsides between 120-650 meters as grapes at higher elevations do not receive the prime ripeness and right characteristics for a Brunello.

The more traditional style, typically what I prefer, are those that have a longer maceration and age in large Slavonian vats resulting in wines that are drier and more tannic.  The modern style have a shorter maturation where the wine is aged in small French oak barrels with a more fruit forward style.

Val di Suga began in 1969 when a company owned by Aldo Moro purchased vineyards in the north of Montalcino.  They started producing wine in their own cellars in 1982.  The winery had changed hands in 1994 under the Angelini Group and Bertani Domains.  They own about 135 acres of vineyards dedicated to Sangiovese Grosso and is one of the select wineries that owns territory across 3 diverse terroirs of Brunello with different slopes, sun exposures and soils.

Their 3 cru single vineyard sites are Vigna del Lago, Vigna Spuntali and Poggio al Granchio.  The vintage Brunello I’ll be sharing is a blend across the three cru sites.  Vigna del Lago is located in the northeast section of Montalcino with vineyards that are located lakeside in front of the estate.  This is their oldest vineyard made of clay soil.  The climate there is mild and cool.  Vigna Spuntali is one of the most famous cru sites bought in 1988 that is in the southern part with southwest facing slopes.  The soils here are limestone and has more of a Mediterranean climate.  Poggio al Granchio is located in the southeast and was purchased in 1999 featuring galestro or slate type soils.

Unfortunately I guess I didn’t realize how limited my stock was of Brunello where I only have 1 bottle left that I brought back some years ago from my visit to the winery.  With a milestone birthday that I celebrate this month I figured no time like the present to enjoy.  I’ll be updating my post in another week for my birthday celebration as I’ll be sharing the 2001 Val di Suga Brunello di Montalcino so make sure to come back and check out my notes. 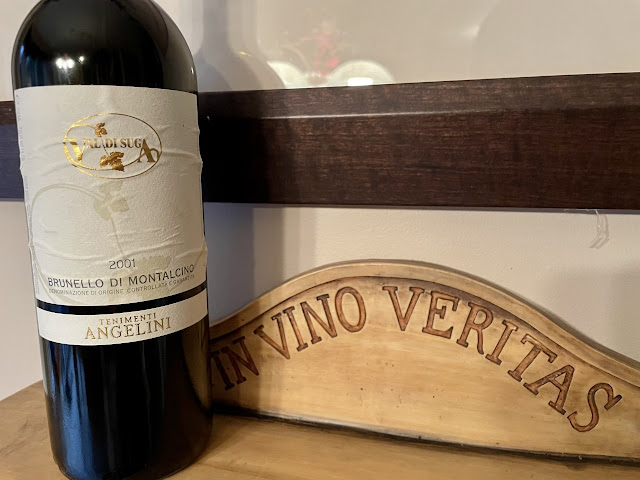 Brunello is a classic match to the local Tuscan pecorino cheese along with red meats like the local wild boar (one of favorite dishes of Tuscany) and the melt in your mouth Bistecca alla Fiorentina.

These wines speak for themselves, but Wine Spectator back in 1999 ranked Brunello as one of the top 12 best wines in the 21st century and later in 2006 it’s one of the absolute best in the world.  Although they come with a heftier price tag, when I see what some of the wines go for produced in the US you’ll find me hunting down a Brunello any day over those.

Join my fellow Italian food and wine lovers as they share their pairings and Brunello selections this month.  Catch us live on Twitter this Saturday at 11am EST @ #ItalianFWT.  Ci vediamo!  See you soon!