It’s time to feature a grape I’ve taken a liking to since I tried it for the first time a couple years ago, Pignatello.  This month I’m joining the Wine Pairing Weekend (#WinePW) crew again as we explore new varietals hosted by Wendy Klik of “A Day in the Life” blog.  One of the reasons I started Vino Travels, almost 9 years ago next month, was to dig into many of the unknown Italian grapes, like Pignatello.  Italy has so many wonderful native grapes that the average wine consumer has probably never even heard of or had the privilege to try.  Today I hope to change that exploring this native Sicilian varietal.

The wine that I’m sharing today, a 2014 Barone di Serramarrocco Pignatello, I brought back from my last trip to Italy when I visited Sicily in October 2019. As you can tell I’m long overdue for a visit and for trying this bottle, although I was impressed how many years are probably still left for it to age.  The Barone di Serramarrocco estate was granted to Don Juan Antonio Marrocco whom became the first Baron of Serramarrocco by King Philip IV of Spain due to his selfless acts by providing shelter to many folks in Sicily during the plague.

The Barone di Serramarrocco winery is located on the western coast of Sicily in the foothills of Mt. Erice on a hillside surrounded by forests.  It is situated about 7 miles from the temple and amphitheatre of Segesta, which is labeled as “one of the most famous archaeological sites in Europe. It occupies about 150 acres with 54 acres dedicates to vines.

The soils here consist of clay with calcareous sandstone and limestone.  The terroir is protected as the “Vigna di Serra”, which is the first Protected Designation of Origin (PDO) for Erice and the Trapani province.  Their belief is in “high density and a low wine yield”.

Pignatello is one of the oldest grapes of the Erice DOC wine route and within the Trapani province. It’s more commonly known as Perricone. It is believed the word comes from Sicilian dialect, pignatidare, which are the red soils of the Trapani area that are used for making cooking pots known as pignata. The Pignatello grape grows really well in these soils. It was once widely planted in the late 19th century and used in Marsala Ruby wine until the demand and consumption of these wines decreased and the grape faced possible extinction. Very similar to Grillo, which I featured in my last blog.

The 2014 Barone di Serramarrocco Pignatello Terre Siciliane IGT is made up of 100% Pignatello from their cru vineyard, Vigna di Sammarcello.  The Vigna di Sammarcello vineyard covers about 9 acres and exclusively planted with Pignatello.  Per the winery’s website, this cru site “produces wines of great structure, long maturity with a complex Mediterranean bouquet and finesse”.

All the grapes are harvested by hand.  The wine spends 18 months in 500 liter new tonneaux with an additional 10 months spent in the bottle.  this wine was deep, dark garnet in color. An intense, complex nose showing aromas of cassis, herbs, cocoa, baking spices, black cherries and plums. Big, firm tannin right up front on the palate, although I didn’t give it enough time to breathe and this wine needs it. A solid backbone of acidity showing up very dry on the palate with blackberry notes. About 6,600 bottles were produced.  ABV 13.5% I paid only 22.50 Euros for this in Sicily, is quite the steal in my opinion. 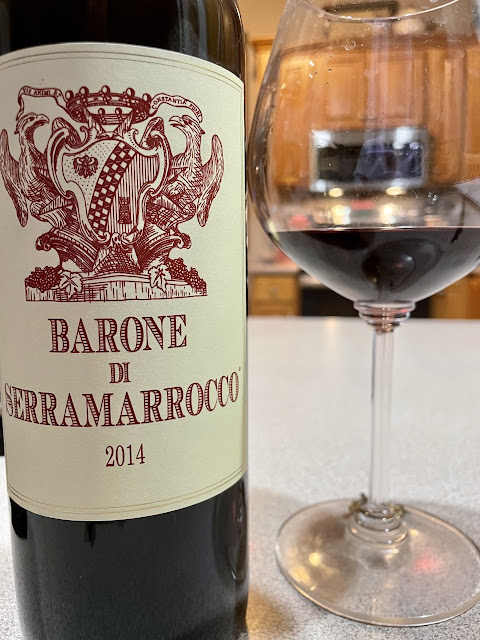 I finally got an Instant Pot for Christmas. I feel like I’m the last person to own one, but with little ones sometimes you have to take the easy route. During Super Bowl this year I decided to test it out making some barbequed ribs and then I’m broiled them for a few minutes with some homemade bbq once they were cooked. Simple and easy, but oh so delicious. I was so excited to dig in I forgot to take a more professional picture. I was thankful this barbequed ribs wee able to stand up to the Pignatello since it was such a big wine.  Success! 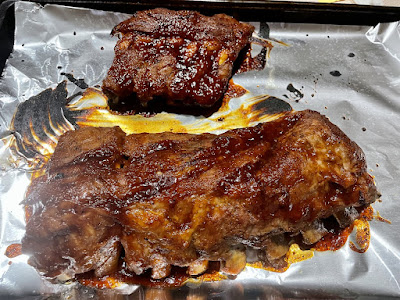 Join the rest of our food and wine loving friends this Saturday on Twitter with #WinePW at 11am EST and discover some new wines and pairings for yourself.