A First Look at Mexican Wines Including Italian Grapes

As I always say when it comes it comes to wine that the learning path is never ending.  This month our Wine Pairing Weekend crew (#WinePW) is exploring Mexican food and wine pairings.  This was my first experience tasting Mexican wines and was quite thrilled when Max, the owner of Tozi Imports, hand delivered about 9 different Mexican wines to sample.  What was even more exciting was that a few of these bottles were focused on the Italian grape, Nebbiolo.  So you guessed it, that is our feature today!  I look forward to sampling through the rest, especially with Cinco de Mayo right around the corner.

Wines have been produced in Mexico since the early 16th century when the Spanish expedition led by Cortes landed in Mexico in 1519.  By 1521 they had defeated the Aztecs and brought cuttings to plant.  From that time until about 1699, Mexico became the hub for all winemaking in the New World.  The King of Spain wanted to protect the Spanish wineries so he banned all commercial winemaking and limited its use only for sacramental purposes.  It wasn’t until the late 1800’s when a social and cultural reform took place and in 1888 the first mission converted to a winery.

The late 1980’s wine was being mass produced without a focus on quality.  The doors had also opened to imports so about 95% of the wineries shut down and the wine production went from about 4 million gallons of wine produced to under a million.  This gave rise to small, boutique, family-owned wineries that revolutionized the wine scene.  Their focus was on single varietals versus blends, modern winemaking techniques with a focus on quality.  These wineries have a lot of So even though Mexico has a history in the wine industry it wasn’t until recent decades when things have shifted in terms of quality for Mexican wine. 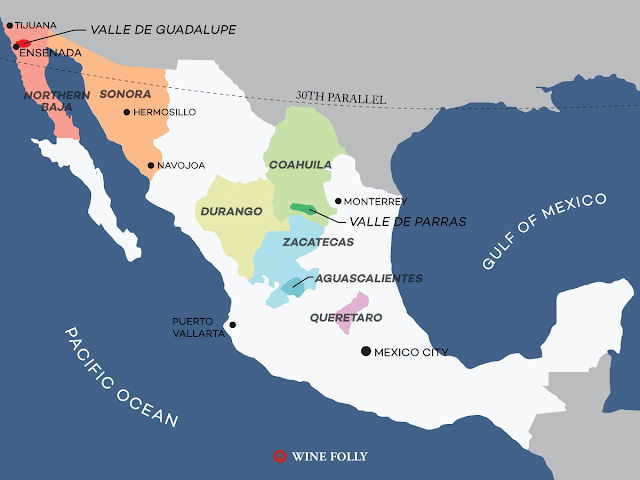 All 3 Nebbiolo wines I’m sharing today come from the winery, Vino del Marques. Nebbiolo is heavily used by the winemaker, Mauricio Rodriguez. The winery was founded in only 2013 and is located in Queretaro, which is about 3 hours north of Mexico City in the heart of the Central Mexican Highlands.

The Queretaro is the 2nd largest wine region in Mexico with some of the areas being some of the very first plantings of vines in Mexico. It’s an area known for its sparkling wines and wines that aren’t too high in alcohol, including the Nebbiolo today. This area has a very arid climate, but the high elevations of this area allow the grapes to thrive. At Vino del Marques their Nebbiolo grows at 5,905 feet above sea level. Due to the temperatures the grapes are harvested earlier here in the July to August timeframe.

My first up was my sipper prep wine while I made dinner, the 2017 Vinos del Marques Danza de la Marquesa. Made of 65% Nebbiolo and 35% Tempranillo. A beautiful salmon color with a sweet nose of ripe strawberries, roses and citrus. A round mouthfeel with lush strawberry notes, citrus with crisp acidity lingering through until the finish. A refreshing, enjoyable rose! ABV 12% 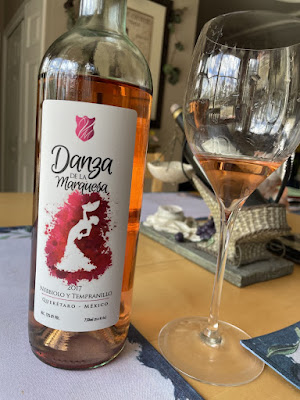 The second Nebbiolo wine is the 2016 Vinos del Marques Musica del Marques. This is made from 90% Nebbiolo and 10% Malbec and was actually my preferred wine of the two. This wine spends 9 months in used French oak. It was deeply colored garnet in the glass. A beautiful nose of cherry, violets, spice and some cocoa. It was a smooth, balanced wine with great acidity and I love the way the cherry flavors showed on this wine. Very different than the Nebbiolo of Piedmont, especially when it comes to the tannin characteristics. SRP $22-25

The third Nebbiolo was a 2014 Vinos del Marques Escultura del Marques Reserva. This wine was made up of 55% Nebbiolo and 45% Syrah. This wine spends 18 months in new French and American oak. Also deeply colored garnet in the glass. Mostly vanilla and cherry notes on the nose with a hint of roses. Juicy acidity up front and integrated tannin. Full-bodied and richly concentrated fruit with more vanilla showing up on the finish with nice length. ABV 13.5% SRP $50-55 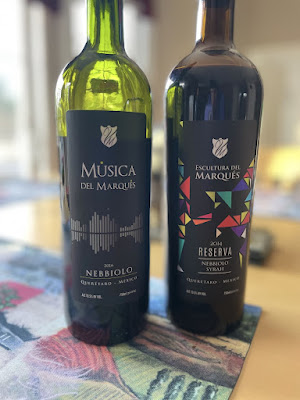 I could have taken the route of pairing these wines with Mexican food, but I wanted to try something different. Plus, we just recently picked up our meat farm share and the short ribs were calling my name. I used my new Instant Pot that makes my life so much easier and paired the two red Nebbiolo wines with succulent short ribs with carrots in a balsamic glazed sauce. For a side I made some risotto with herbs and mushrooms. It was really a great pairing together and everything seemed to complement one another. 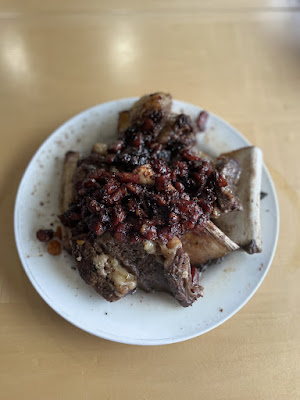 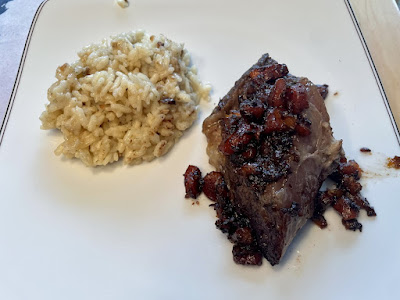 An interesting tidbit about how the wines are taxed when sold within Mexico that I learned from the virtual tasting with Max. There is an extra charge of 48% tax on the cost of the bottle when sold within Mexico versus those that are exported where the price drops to 16%. You would think that the country would want to export, but also promote products within their home country, but at a 48% tax it definitely allows wineries to lean towards a preference of exportation.

Join the rest of our Wine Pairing Weekend friends as they share more Mexican wines with their suggested pairings. Catch us live on Twitter this Saturday @ 11am EST at #WinePW. Have a great weekend!

*These wines were provided as samples, but opinions are always my own.  Importer is Tozi Imports.
vinotravels21 at 3:55 PM
Share